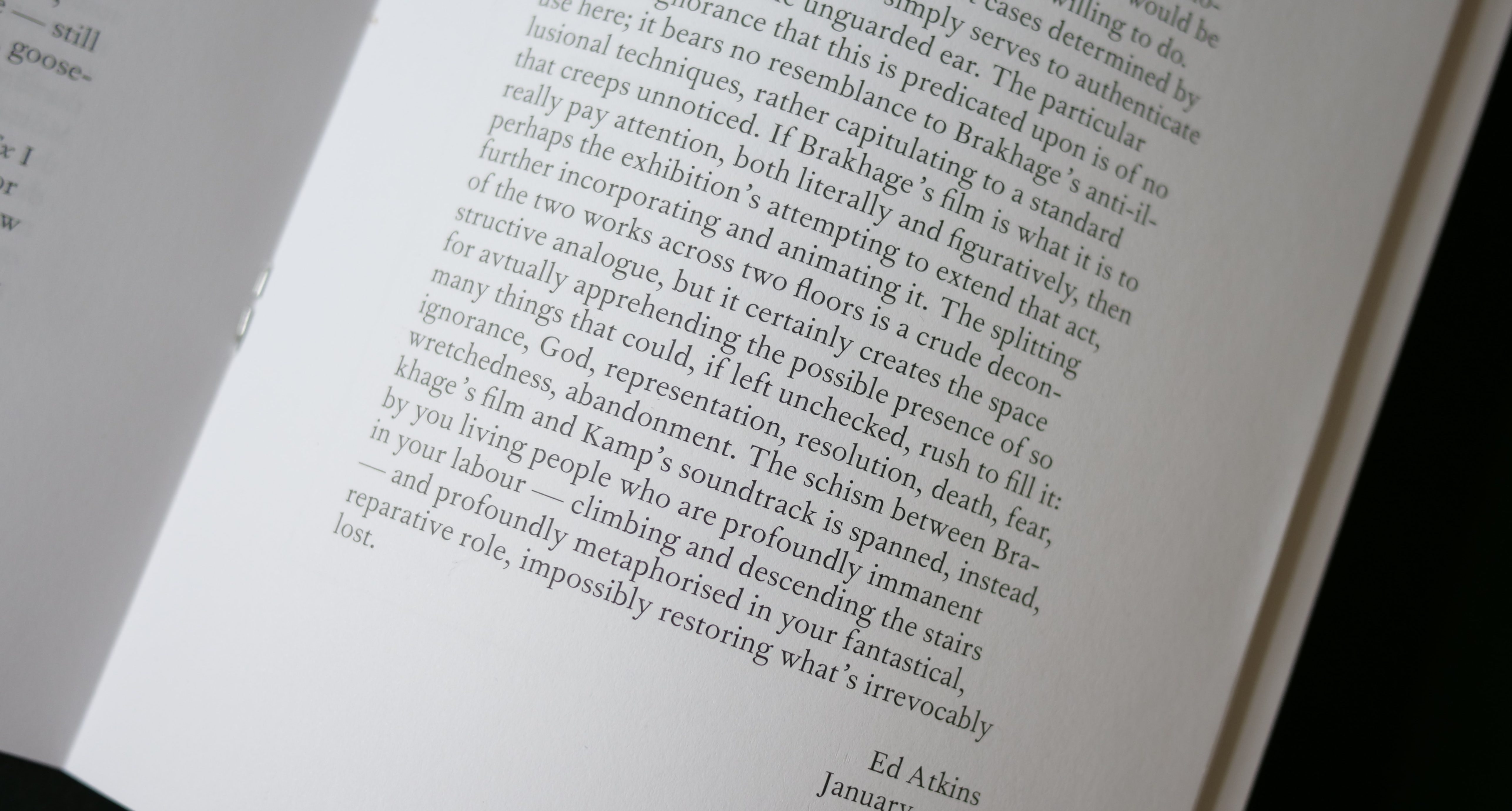 The planned second iteration of “The act of seeing with one’s own eyes” by Ed Atkins and me at The Blank Contemporary Art Gallery in Bergamo is fully produced but not physically happening due to increased COVID restrictions in Italy. However, President of The Blank Stefano Raimondi, Ed Atkins and I had a discussion about the project which you can watch on The Blank’s Facebook page.

Sarah Birchall wrote a great summary of our talk, which I am quoting below:

The Blank Contemporary Art is an Italian artistic network who aspires to enhance the contemporary art world by connecting both national and international institutions, artists and the public through an abundance of projects. The conversation was situated online due to current coronavirus restrictions.

Ed Atkins is a British contemporary artist whose work comprises of video, text and animation. His practice can be described as ‘subverting the conventions of moving image and literature’.[1]

David Kamp refers to himself as a ‘sound designer, composer and sound artist’.[2] He works in close collaboration with institutions and artists to create his soundscapes and sound installations.

The talk focussed on the work and processes of a film Atkins and Kamp collaborated on, entitled The Act of Seeing With One’s Own Eyes (2019). It was curated by Atkins and the sound composed by Kamp. It is a silent film, originally created by Stan Brakhage, showcasing forensic activities at the Allegheny Coroner’s Office in Pittsburgh in 1971. Their collaborative efforts subject their viewer to the differences in senses as they encounter themes of death.

The conversation begins with Atkins and Kamp describing how the film materialised and how they became interested in this project. Atkins’ background in animation meant he grew interested in silent films, leading to the silent film by Stan Brakhage. He was interested in the absence of sounds in Brakhage’s film, especially as the film depicted dead bodies being autopsied. By adding sound to a silent film, it breathes life into the moving images and gives some weight to something that was previously weightless. This added weight creates depth and can affect how moving images, films or images are perceived. The addition of sound in Atkin and Kamp’s film provides their audience with additional sensory information, allowing them to apprehend the contents of the film through their own senses.

A point of discussion that intrigued me was contemplating, how do you add sounds to a gruesome film such as dead bodies being autopsied? What do they sound like, and how do you go about creating such sounds? What else do you have to consider? It is a technique known as ‘Foley’, where sounds effects are reproduced using various methods and then added to films in post-production. Kamp described this process as intense since he was confronted with unpleasant visuals in Brakhage’s film and aspired to create the soundtrack as realistic as possible. As well as giving presence to the people and the activities in the film, Kamp also took into consideration the environmental sounds such as sounds of ventilation and door openings. He had to think about the distance of these sounds – would they be heard from afar or close-up? – which led to finding a balance between background and foreground sounds in order to give an accurate representation of the space. On top of this, the autopsies are taking place in an operating theatre and so a consideration of how the sounds would sound in this space is also required since sounds are shaped by the space they are present in. Kamp’s description of the soundtrack and his methodology implies he is more concerned or more interested in achieving the balance between background and foreground sounds and recognising where sounds might appear in unexpected areas or at unexpected moments. It seems as though this level of sound design requires a great level of concentration and open-mindedness so you can imagine yourself in such a space. It made me realise how extensive this field of sound design is and how oblivious we are to the sounds of our environment, or in films, until they are absent.

Once the sounds were added to the film, Atkins detailed that the two elements, visual and aural, were separated in the exhibition. The silent film was situated in the basement of the exhibition space and the soundtrack Kamp created was played in an octagon-shaped hall, upstairs. While separated, the two elements were played in synchronicity. The idea behind this setup was so the viewer could move between the rooms and unite the two elements. Kamp explains that the viewer could decide which room they wanted to experience first and how this altered their perception of the film as well as the soundtrack; “[…] going from the sound room to the image room and back again and once they did that a few times, they had an idea of the sound and […] once you saw the picture, you perceive the sound room differently because you know what it’s referencing and the other way around.” The piece is connected through the memory of the viewer and this experience can differ depending on whether the viewer listens to the soundtrack first or if they watch the film first. It seems the viewer cannot escape the piece since they will either be looking at it or listening to it because each room stimulates a different sense. This feeling reflects our avoidance of the theme of the film, death, yet, in this situation, the viewer is constantly being reminded of death and what it means to be alive.